I have been peacefully plugging away at my current Work In Progress; a follow-up to my book Sheriff and Priest, working title Son of the Priest. It’s about the trials and tribulations – both literal uses of the words – that Wimer’s son Jean encounters, trying to defend Wimer’s legacy from some rapacious land-grabbers.

I’m now about 2/3rds of the way through, and have begun to be very worried indeed. You see, although I know how the book ENDS – and of course, how it begins – I have had, up until today, no clear idea of why history took the course it did, in my little corner of Suffolk. Slightly problematic, for someone who prefers to lean on the historical rather than the fictional balance of historical fiction…

Enter Monmothshire County Library, the fine building whose picture you can see. In 1969 they purchased a volume of W.A. Morris’ “The Mediaeval English Sheriff to 1300”; on 23rd May 1973 it was transferred to the Students’ Library, where students are sternly injuncted:

“If there is notifiable disease in the house, i.e. Scarlet Fever, Diptheria, Thyphoid Fever, Measles, or Chicken Pox, do not return your books to the library until the Local Health Authority has inspected the house.”

Mysteriously, despite the fact that it had been taken out on loan three times in May and June, it was taken off the shelves on the 28th June 1973. Perhaps Scarlet Fever intervened… In any case, I found it in around 2005, in the second-hand book shop in Sutton Hoo, I think. And as I had scarlet fever, measles, and chicken pox in the 1960s, I thought it was safe to buy…

Now I’d used it extensively in researching Wimer’s career for Sheriff and Priest, of course; but for some reason it hadn’t occurred to me to mine it for the solution to Jean’s woes. Well, Reader – I’m not going to give away any spoilers; but should you have a copy of the book in your posession, I am finding pages 153-161 MOST useful 🙂

Many thanks to Paul Bennett for this fabulous review! 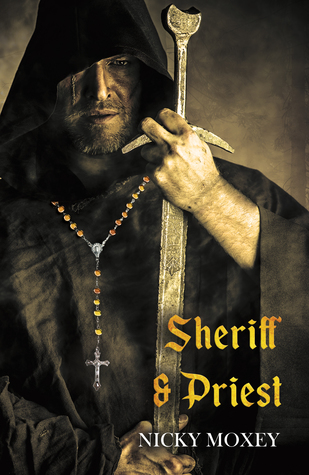 It’s been nigh on 90 years since the Normans came to stay and to rule, and it was a tough time to grow up a Saxon.  Wimer, though is made of stern stuff and survives the second class treatment meted out by the Norman elite.  His intelligence and adaptability such that he can rub shoulders with and become friends with the future Henry II.

Once again, I found myself immersed in a period of time that I’m not that familiar with.  A time of Sheriffs and the fiduciary demands of the King and the Church.  Ahh, the Church, a subject that at once fascinates and infuriates me.  Wimer is caught up in the fervor of reaching heaven, not only for himself as a priest but for those he cares for in that capacity.  An unfortunate set of circumstances and a bitter feud between Henry and his Archbishop Thomas a’Becket has…

Today is The Day!

Both paperback and e-book versions are available on all Amazon sites (and are even linked together, after a bit of fighting with dragons), and the ebook is trickling out onto the wider distribution sites – currently available on Kobo and Indigo but not a couple of the others.

There is so much you could do to help make the launch successful:

Review – For The Most Beautiful

For The Most Beautiful

Think of the tale of Troy. What names can you remember? Active men; Achilles. Paris. Passive women – Helen, only remembered for being beautiful; Cassandra being laughed at for her unbelievable prophesies. In “For The Most Beautiful”, Emily Hauser has told the story of two unlikely heroes, women whose voices have been lost. Krisayis, daughter of the Trojans’ High Priest, and Briseis, princess of Pedasus, start off near the top of the hierarchy, but both are enslaved by the Greeks. Their struggles in the face of that disaster, and the need to preserve the essence of Troy, form the core of the book. Looking down from the clouds is the panoply of gods – with their own desires and agendas, and with two of the female gods NOT chosen as “most beautiful”…

If I hadn’t been reading a review copy, I might have abandoned it. The early vacuousness of its protagonists, and shallowness of the gods, really irritated me. But I persevered, and gradually grew to like, and then admire, the girls – very much. I got to the end of the book, and immediately read it again, this time appreciating the superb character arcs that Ms Hauser has drawn. The gods hadn’t changed, but then that is the nature of gods.

This is a fascinating picture of life in Bronze Age Troy, from the point of view of women at both the top and bottom of society. Ms Hauser’s knowledge of, and respect for, the period shines through. Read it twice. You won’t regret it.

STITCHES IN TIME – The Story of the Clothes We Wear

The author’s deep scholarship is very evident, as is her joy in clothing. A collection of anecdotes talking about an item of apparel per chapter, this book could have been entertaining froth; but it’s much, much more.

She focusses on the last 200 years, but ranges from prehistory onwards, describing the evolution of items in a very engaging manner. The book is illustrated with black and white sketches and photos, and has a colour centerfold.

From knicker elastic to hats, topics are covered in detail. My favourite timeline takes the pocket from a fold in a Roman toga to today’s handbag, covering chatelaines, a man’s “posturing pocket” (not what you might think), and the 18thC “indispensable” on the way; each journey has similar intriguing details.

I learned something new from every chapter, and was thoroughly entertained whilst doing so; there’s articles of interest here for everyone. The book has an extensive bibliography and source reference material, making it a good springboard for research. An excellent book for either the fashionista or the historical novelist in you…

Review – Irvine Stone’s “The Agony and the Ecstacy”

The Agony and the Ecstasy by Irving Stone

This book starts off slow, and the plot continues at this pace – it’s a pretty straightforward recounting of the major events in Michelangelo’s life, with some occasionally wooden reactions to them.
What makes this book shine – in fact, what makes it unmissably stellar – is the lyrical, beautiful descriptions of both the process of sculpting, and Michelangelo’s sculptures and paintings themselves. You learn how difficult it is to mine marble, how to transport it, how to choose a piece without inclusions by watching the sunrise through it. Then Michelangelo picks up his hammers and chisels – made afresh for each sculpture – and Irving Stone takes you inside the mind of the master, so that you feel you understand the exact places to carve away the snowy grain of the marble to achieve the desired effect, and you taste the marble dust at the back of your own throat.
Stone’s bibliography leaves you in no doubt that he knew what he was talking about, and there is a surprising body of Michelangelo’s writings in existence. I think that reading this book is about as close as you’re likely to get to one of the greatest creative minds who ever lived, and this book will be coming with me when I go to Florence. It has made me yearn to see these great sculptures and frescos, which Stone describes with such authority and conviction.

View all my reviews

Now that soon-to-be-ex hubby has moved out, taking around 1,000 books with him, I have some room on the shelves – and the freedom to sort them as I please 🙂

I am slowly working my way around the house, moving books to where they need to go, and deciding how to order them. Some decisions are no-brainers – the science fiction stays in the lounge, because it’s the largest volume by genre in the biggest single run of book shelves; and alphabetical is as good a sort method as any.

The study is giving me the greatest pleasure – and it’s still very much an artwork-in-progress. The current arrangement is, left wall; work textbooks, psychology, diabetes, health, diet and current (ish) travel books:

Right wall; general fiction, biographies, short stories, poetry, archaeology/history books that are tentatively NOT in the writing research category, and natural history books. The big gap in the middle holds manuscripts of my own poetry, kids’ books and novel – plenty of space for more 🙂

The back wall is slowly filling up with history and writing books from all over the house. Still to go on these shelves are the have-read piles in my bedroom, and the reading-now piles next to my chair in the lounge and beside my bed.

Then I shall move all the cookery and gardening books into their proper place in the lounge and dining room; sort out the photos mountain that is half in the study and half in the kids’ shared bookcase upstairs (not going near their individual bookshelves, too scary!), and I shall be done.

Given that my Christmas list was almost entirely books, I may need more bookshelves 🙂

I hope you enjoy my books as much as I loved writing them! Here’s my Amazon page.